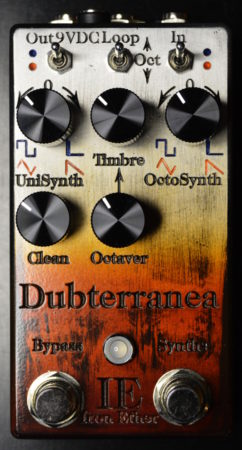 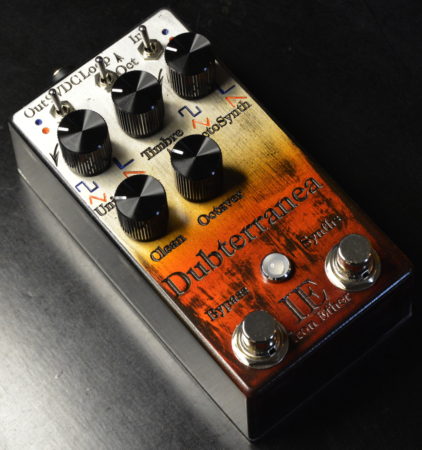 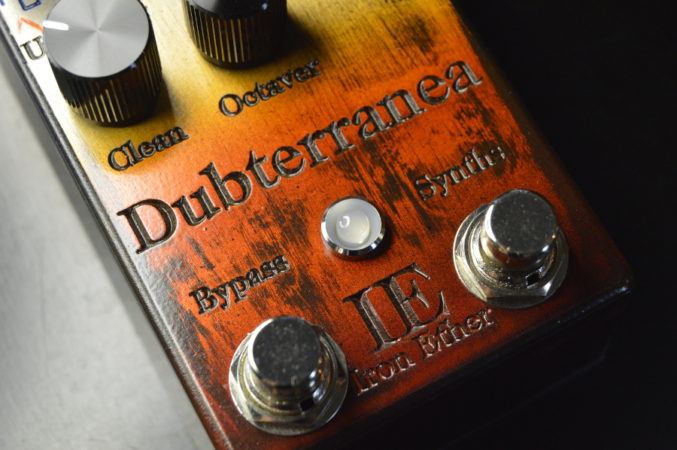 Dubterranea is a multi-octave pitch-tracking oscillator, capable of generating classic synthesizer waveforms in three octaves simultaneously. When combined with the Xerograph Deluxe filter, the pair form a full subtractive synthesizer, allowing a bass or guitar (or voice, saxophone, etc...) to create a wide variety of thick electronic timbres - all with an immediate, intuitive, one-knob-per-function interface.

The pedal contains two synth voices - one playing in unison with the note you play, and a second that can be switched between one octave up and one octave down. Waveforms can be selected independently for each of these voices, each with its own distinct timbre - triangle, sawtooth, square, and narrow pulse.

Additionally, there is a third voice based on classic octave-down pedals. This voice's tone is influenced by the sound of your original note, with a dedicated Timbre knob that removes harmonics at one end - for an extremely deep, smooth, almost sine wave sound - and then progressively adds harmonics at the top end, for extra gritty, harmonically rich sounds perfect for feeding into the Xerograph Deluxe filter.

A second foot switch turns the synth voices on and off, allowing the pedal to be used both as a traditional octave down pedal, and a synthy oscillator, without adjusting controls. The synth voices also have their own dedicated effects loop, so that effects can be applied only to these voices, and an entire synth chain can be switched on and off with the Synths stomp switch.

Building on the concept of the original Subterranea, the Dubterranea is an entirely new, original design from the ground up, designed in collaboration with engineer Don Stavely.

Timbre: Controls the sound of the Octaver voice. Turning down removes harmonics, and at fully counter-clockwise, the sound becomes nearly a sine wave. Turning up allows more harmonics from your original signal through, and also exaggerates signal discontinuities inherent in the phase-flipping octave divider circuitry, generating a more gritty, harmonically-rich signal.

Clean: The volume of the clean signal.

Loop jack: The Synth voices are sent out on the ring connection of this jack, and return on the tip connection. Use an insert cable here to add effects only to the Synth voices and switch off your entire synth chain with the Synths foot switch, or insert a volume pedal to control the level of the synth voices dynamically.
Controls:

Synth waveform selector/volume: For each voice, a switch selects either the angled waves (triangle and sawtooth, indicated in orange) or the rectangular waves (square and narrow pulse, indicated in blue). The associated knob then chooses the waveform and sets the voice's volume by turning up or down from 0.

Triangle is the mellowest wave, with very few harmonics, often used for flute-like sounds.
Sawtooth is a buzzy, harsh wave containing both even and odd harmonics, often used in synthesizing bowed string sounds.
Square is sometimes described as sounding "hollow" and often used to create woodwind and brass instrument sounds.
Narrow pulse has a thin tonal quality, rich with harmonics but without much fundamental.

Oct switch: Sets the OctoSynth voice to either play one octave below or one octave above the note you play.